As a retirement gift to himself, Grandfather bought a new, flat bottom, aluminum fishing boat. Aluminum was a relatively new material used in boats back then. This boat was considered the “latest and greatest” in 1966. Up to this point, he made his fishing boats out of plywood. The boat was 16 foot in length, much longer than most boats of the day, but necessary for fly fishing so people could fish with enough separation to prevent getting lines tangled. I think my grandfather also had in mind fishing with kids and grandkids as his family grew. It was also much lighter than his older wooden boats, light enough that he could launch and load it all by himself. This boat, along with his 1963 Evinrude 3hp motor and Silvertrol trolling motor, made up the Irvin Travis fly fishing boat that I learned to fish and grew up with.

My grandfather was a fly fisherman and fly fishing was the only kind of fishing we did.  I very much enjoyed the time I spent fishing with my grandfather, father, and other family members. He taught us all many of life's lessons, and I consider myself to be very fortunate to have had such a grandfather. After he passed away in 1981, neither my father nor I could emotionally bring ourselves to go fishing for about ten years. Grandfather's boat wound up propped up next to the shed at my home for the next 30+ years. Dad and I did get back into fishing, but with newer, more comfortable, trailered boats. It was during this time that we got involved with the Indianapolis Fly Casters who helped bring us back to fishing. We happily continued the tradition of fly fishing in Indiana lakes and stripper pits as my family grew. Eventually, we acquired two Gheenoe fishing boats which would accommodate five people fishing.

This spring, I planned a big fishing trip with my Father, Uncle and his son, my son, nephew, and soon to be son-in-law who I want to make into a fly fisherman before accepting into the family. That made potentially seven of us, and I came to realize that we needed another boat. I went to the side of my shed and brushed away 4 inches of pine needles and dragged out Grandfather's old fishing boat. The boat was in terrible shape after sitting for 30+ years. The wood was all rotten. The bolts that held the wood together were all rusted, the boat was badly stained from the pine needles and being on the ground. How could I have let my grandfather's boat deteriorate to such a condition? It was then that I made the decision to restore it.

My father and Uncle Curt are both in their 80's. I don't know how many more fishing trips we will all have together so restoring this boat, that we all remember fly fishing in, became all the more important to me. I decided to restore it to the best of my ability and surprise them on our trip.

It took me about two weeks, working between rain showers to whip this boat into shape. The boat was in such bad shape that I decided to sand blast and paint it. I never worked with a sand blaster before but was able to borrow one to use with my air compressor. After stripping the boat of all the wood, and rusted steel bolts, I sand blasted it down to bare aluminum. I did leave a few customizations that my grandfather had such as the fore and aft hooks to clip on wire fish baskets, and special handles on the sides for hand launching, so we would know it was still his boat. 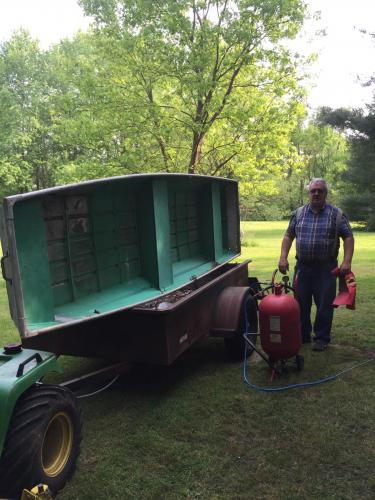 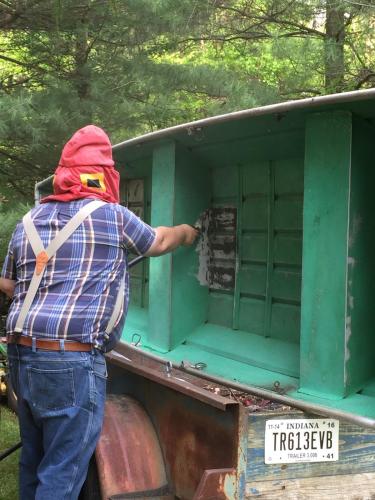 I used a utility trailer as a workbench and filled the boat full of water to find leaks, of which there were many. I replaced several leaky and loose rivets along with now rusted nuts and bolts that he expediently used to replace rivets.  After patching the leaks, I used a paint sprayer and painted the interior and exterior sides of the boat, leaving the bottom unchanged because it had the original stain left behind from the stripper pit water. I had a difficult time finding “fishing boat paint” at the usual hardware and paint stores in the area. I wound up going to the local John Deere and buying a gallon of John Deere green tractor paint, which I figured would be good for a fishing boat, and I was right! I rebuilt the seat platform and trolling motor mount in the front of the boat, using as little wood as I could so I would not add too much weight. I also replaced the wood on the transom. 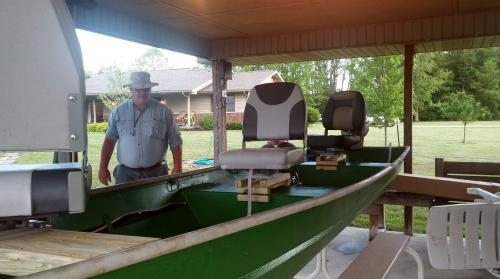 I decided to make some improvements. I had money, tools, and accessories that my Grandfather simply did not have available in his time. I added three new comfortable seats which are pure luxury compared to the simple boat cushions that we had before. I created my own seat mounts. If you look closely at the pictures, you can see that seats can adjust from side to side to keep the boat balanced.  This was my own invention. The seats were swivel mounted with quick release swivels.

My grandfather originally had two 6 volt batteries for the trolling motor which he put in the middle of the boat behind the middle seat. I did the same except for only one 12 volt battery. I ran a “jumper cable” from the middle of the boat to under the front seat and used bolts and washers to make a place for the trolling motor power cable to connect. I added a float activated bilge pump, something that would come in handy if the boat started leaking again. We never had a bilge pump on the old boat. 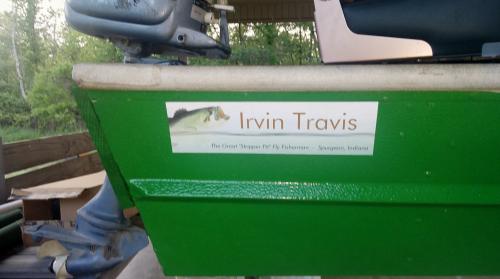 I still had the original Evinrude 3hp Lightwin motor which I restored a few years ago, and his Silvertrol trolling motor that I cleaned up and put back on the boat. I decided that I wanted to put my grandfather's name on the boat so I had some bumper stickers made up that said “Irvin Travis, The great 'stripper pit' fly fisherman – Spurgeon Indiana”, which I thought was a fitting tribute. 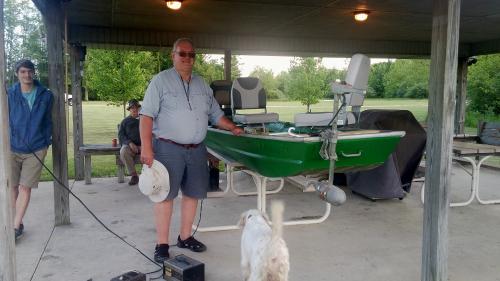 After an hour or so of admiring the boat, one person suggested leaving the boat as a museum piece, but I decided to launch it and let my son, Tommy, and son-in-law, Alex take it out for the evening fishing. As I hoped, the boat worked perfectly. My father declined to go out in the boat because he lacks the balance he had in his younger years and preferred the safety of the newer boats. Curt and I took the boat out and realized that we had to re-learn the long forgotten art of fly fishing while not tipping the boat. Curt and I are much heavier than we were in your younger years and had to be careful. Eventually, we caught on and had fun fishing out of that boat again, although allowing my bird dog in the boat proved to be just too much risk. 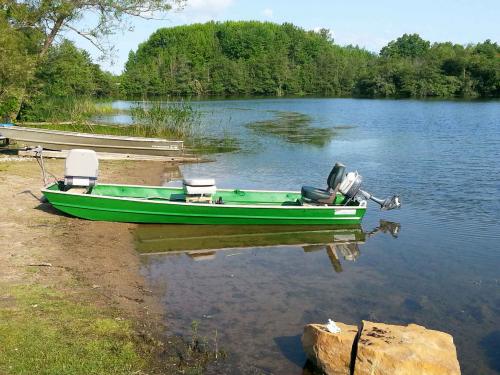 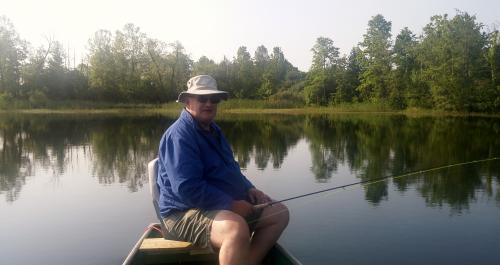 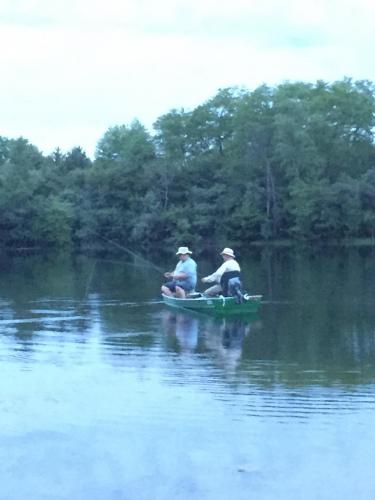 Comments About This Project