These motors use pressurized fuel tanks, known as Cruis-a-Day Tanks.  Rather than sucking fuel from the tank, the dual line hose pumps air into the tank, pressurizing it to 4-7 PSI which forces fuel back to the motor.  Basically, these pressurized tanks are an extremely dangerous fire or explosion danger.  OMC finally stopped using these tanks after 1959..

You can tell if you have one of these tanks because the hose will have two lines, one to pump air into the fuel tank, and the other to deliver fuel to the motor.  This type of tank was the first exterior fuel tank that OMC came out with and was new technology in its day.  Once the problems were identified, boat motor manufacturers switched to a single line fuel suction system which is much safer.

If you have one of these old pressure tanks, chances are it will need some maintenance in order to function properly.  There are kits available to repair the gaskets and seals on these tanks which can still be bought today.  You need to make the decision to either repair your existing tank or convert to the type of fuel pump and line that OMC uses today.

The following procedure tells how you can your motor to a more conventional fuel pump, line, and tank which will be safer and more reliable.

The process for making this conversion is fairly simple, especially if you already have your carburetor removed for tune up.  The materials you will need include the following:

Mikumi is a Japanese company that has been around for years making carburetors and fuel pumps.  You will see a lot of their fuel pumps used on go-carts, ultra-light aircraft, and many other applications involving small engines.  This fuel pump can be found at just about any go-cart shop.  I bought this one on-line for around $22.00.  Most fuel pumps for small Evinrude and Johnson motors mount directly to the crankcase.  In the case of this 5.5 HP motor, there is no place to mount the fuel pump.  Larger motors such as the 7.5, 10, or 18 HP con have a stock OMC fuel pump added.

Remove the Carburetor  CLICK HERE. to see instructions on removing the carburetor.

If you remove the intake manifold cover, located behind the carburetor, you will see two holes with rubber flaps over them.  The flaps are check valves which air to travel outward from the crankcase.  This creates a positive air pressure to travel down one of the lines of the dual fuel line to pressurize the tank.  Remove the two screws holding the spring and check valves.  One of these holes goes to each crankcase chamber on our two cycle motor.

Remove the two old lines going through the tiller arm base to the fuel line connector and replace with a single line which will go from the fuel connector to the new fuel pump.  Allow about 2 feet of line to route around to the fuel pump. 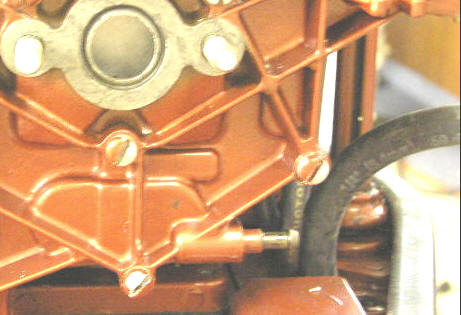 Replace the Carburetor  CLICK HERE. to see instructions on installing the carburetor.  Attach 2 feet of vacuum line to the carburetor to be routed around to the fuel pump. 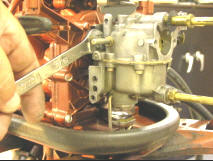 Route your vacuum pulse line, carburetor line, and fuel connector line around to the fuel pump which I place behind the hear shift lever up next to the crankcase.  Trim any excess length form the lines and connect to the fuel pump.  When routing these lines, keep them way from any moving parts, or linkages.  The cowling should just fit over your new fuel pump.  Use zip ties to secure the lines so they will stay in place. 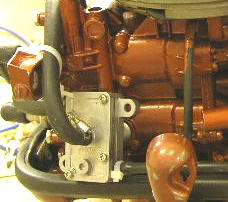 Your motor is now converted and you are ready to use your new gas tank and fuel line.